With ancient cities hidden among forests with oxygen-rich air, Antalya is a holiday paradise offering much more than one might expect.

Antalya was founded in 158-138 BC by Attalus II, King of Pergamon, who named the city Attaleia after himself. Having been inhabited continuously since then, it was encircled by strong protective walls in Roman times. The Byzantines and Seljuks successively occupied the city before it came under Ottoman rule.

►“Antalya is situated at the end of a gulf, the namesake of the city, and extends over a green plateau that lies parallel to the sea. With its blue sea, luminous sky, the ever-changing colour of its mountains and lush green vegetation, the city is a festival of colours.”

Today it is one of the world's best-loved tourist resorts, with numerous five-star hotels, holiday villages and entertainment establishments. Besides the chances Antalya offers for skiing on the mountains and then descending to the shore for a swim, the proximity of a great number of archaeological sites and ruins enhances its appeal. There are great works of art from different civilizations at every corner of the city. In the picturesque old quarter of Kaleiçi, narrow, winding streets and old wooden houses abut the ancient city walls. When Emperor Hadrian visited Phaselis in Antalya in 130 AD, a beautifully-decorated three arched gate with Corinthian columns was built into the city walls in his honour. It was the only entrance through the city walls. The two towers flanking the gate, as well as other sections of the walls, are standing near the marina. The clock tower in Kalekapısı Square was also part of the old city’s towers. The elegant, fluted minaret of the Yivli Minaret Mosque at the centre of the city, built by the Seljuk Sultan Alaeddin Keykubat in the 13th century, has become Antalya’s symbol. The Karatay Madrasah in the Kaleiçi district, from the same period, exemplifies the best of Seljuk stone carving.

The two most important Ottoman mosques in the city are the 16th-century Murat Paşa Mosque, remarkable for its tile decoration, and the 18th-century Tekeli Mehmet Paşa Mosque. Neighbouring the marina, the attractive late 19th-century İskele Mosque is built of cut stone and set on four pillars over a natural spring. The Hıdırlık Kulesi (tower) was probably constructed as a lighthouse in the second century. The Kesik Minaret Mosque, which was previously a church, bears witness to the city’s long history. The major part of the southern coastline falls within the borders of the city of Antalya. With ancient cities hidden among the trees, lush-green plateaus and forests with oxygen-rich air, trekking routes and beautiful beaches, Antalya is a holiday paradise offering much more than one might expect.

Hotspots along the coastline

Visitors can also find a number of touristic hotspots along the coastline away from the city centre. Kemer, 42km from Antalya through a spectacular mountain scenery, is the first such spot to the west of the city. This resort town has been carefully designed to blend in with the surrounding scenery and offers an ideal environment for a wonderful holiday. The fully equipped Kemer Marina allows yachtsmen to enjoy the unspoiled bays and beaches on the south of the town. Shoppers will delight in the wonderful range of high-quality souvenirs. A beach promenade with its cafes and shops on the north of the marina leads directly to Kemer Beach which was awarded a Blue Flag. Other tourist centres to the north are Kızıltepe, Göynük and Beldibi while to the south there is Çamyuva and Tekirova.

At the foot of 2575m-high Mt Tahtalı (Olympos), 15km south of Kemer, the three harbours of Phaselis were once major commercial centres. The ruins of aqueducts, agoras, baths, a theatre, Hadrian's Gate and an acropolis reveal the city’s historical importance. The ancient city of Olympos is situated on the southern side of Mt Tahtalı. Oleander and laurel bushes shade the Olympos Valley, accessible by land or sea. North of Olympos and up from Çıralı Beach is Yanartaş (at a height of 300m) where, Greek mythology tells us, the Lycian hero Bellerophon mounted his winged horse Pegasus and slew the fire-breathing Chimaera. 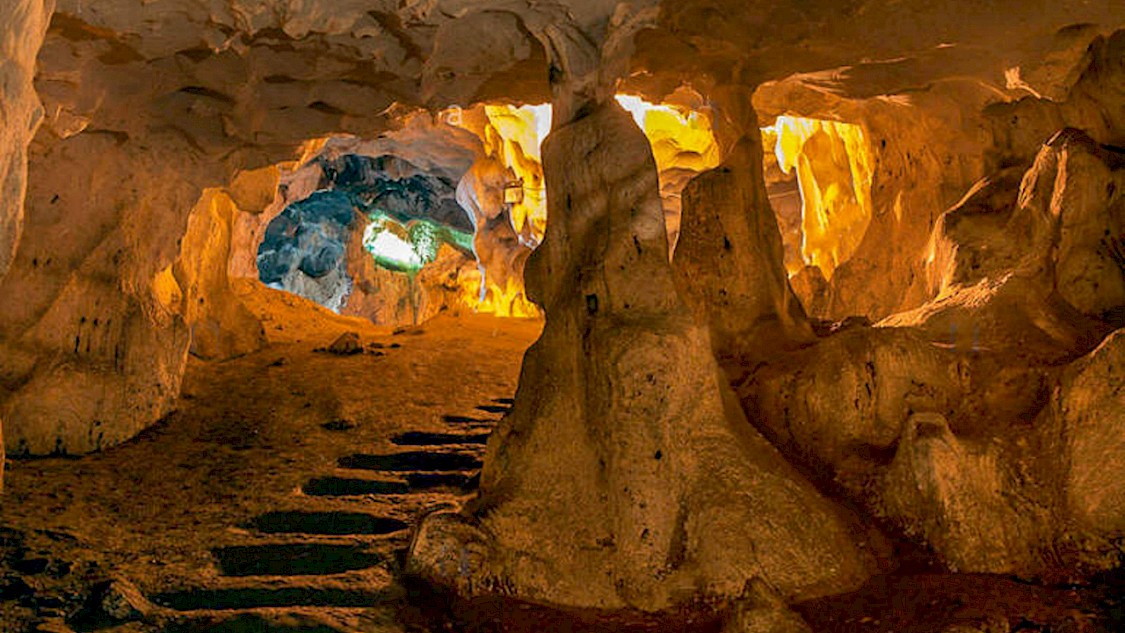 The Karain Cave, which dates from the Palaeolithic Age, is the oldest known cave where human lived in Anatolia. A single entrance, lit by the morning sun, opens onto three large interconnecting chambers. Although the little museum at the entrance displays some of its finds, most of the artefacts discovered are housed in museums around Turkey, with some of them dating to 160,000 BC. The ruins of the city of Termessos are perched on a 1050m-high plateau, lying on the western slopes of Güllük Mountain (Solymos) within Güllük Mountain National Park that is situated to the northwest of Antalya. A wild and splendid landscape surrounds the monumental traces of this city, and a nature and wildlife museum can be found at the park’s entrance.

Limyra, an ancient Lycian city, can be found 10km inland from Finike via Turunçova. Farther along this road is the Lycian city of Arykanda. It was inhabited by at least 500 BC and was destroyed several times by fire or earthquake. The ancient city of Myra, now called Demre or Kale, is 25km west of Finike. St Nicholas, who was born in Patara, was the bishop of Myra during the fourth century AD, and died there in 345. The island of Kekova, an hour from Çayağzı by sea, gives its name to a whole group of picturesque islands, numerous bays and ancient cities.

Continuing west out of Kekova you come to Kaş, a lovely spot surrounded by mountains on three sides. Swimming and diving are excellent in the clear cool water around Kaş. Along the scenic Kalkan road, Kaputaş has a beautiful beach at one end of the Turquoise Grotto.

A little distance to the west is Kalkan, a lovely small hilltop town that overlooks a tiny bay. The ancient Lycian capital of Xanthos, today in the village of Kınık, and the Lycian cultic centre of Letoon are included on the UNESCO World Heritage List.

Xanthos was a city in ancient Lycia, the site of present day Kınık although in early sources Xanthos is used synonymously for Lycia as a whole. The archaeological site of Letoon is located between the towns of Kaş and Fethiye, approximately 4km south of Xanthos along the river. These sites illustrate the blending of Lycian traditions and ancient Greek influence, especially in their funerary art. Archaeological experts and linguists agree that the epigraphic inscriptions are crucial for our understanding of the history of the Lycian people and their Indo-European language.

Saklıkent, 50km from Antalya, is an ideal winter sports resort at an altitude of 1750-1900m on the northern slopes of Bakırlı Mountain. In March and April you can ski in the morning, eat a delicious lunch of fresh fish at Antalya's marina and then go on to sunbathe, swim and windsurf in the afternoon. You can see wildlife – deer and mountain goat – as part of a conservation program in Düzlerçamı Park, north of Antalya, and on the way, you can stop at the astonishing 115m-deep Güver Canyon.

The eastern part of Antalya is as rich as its western part. The sandy Lara Beach lies about 12km to the east. At the Upper Düden Waterfall, 14km northeast of Antalya, you can walk behind the rushing cascade for a thrilling experience. On the way to Lara Beach, the Lower Düden Waterfall plunges straight into the sea, with the nearby rest area that offers an excellent view of the falls, while the view is even more spectacular from the sea. Kurşunlu Waterfall and Nilüfer Lake, both 18km from Antalya, are two other places of superb natural beauty.

Beyond sun, sand and sea

Abundant and up-to-date tourist facilities as well as well-preserved historical sites give you a number of options for daily activities. Perge (18km from Antalya) was an important city of ancient Pamphylia, which St Paul visited on his first missionary journey. Swimmers and sunbathers alike enjoy Belek, a modern luxurious holiday centre and golfer’s paradise, 40km from Antalya. A photogenic Seljuk bridge crosses the Köprü River from the road to Aspendos. The Aspendos Theatre is the best preserved theatre of antiquity, with a capacity of 15,000 spectators. Still used today, the theatre’s galleries, stage decorations and acoustics all testify to the architect’s success. Nearby stand the remains of a basilica, an agora and one of the largest aqueducts in Anatolia. On the northeast of Antalya at the turn off for Taşağıl and Beşkonak is the scenic route that leads to the Köprülü Canyon National Park. The twisting road winds over mountain streams and passes through virgin cedar forest. It is often a slow drive because the view at every turn is more beautiful than the last. The national park, 92km from Antalya, is a beautiful valley rich in flora and fauna. Side, one of the best-known classical sites in Turkey, was an ancient harbour whose name once meant pomegranate. Today it is a pretty resort town. Its ancient ruins, two sandy beaches, numerous shops and extensive tourist accommodation attract throngs of visitors. Tucked in pine forests on the east of Side, the holiday resorts of Sorgun, Titreyengöl and Kızılağaç are popular for their sandy beaches and sparkling sea. The atmosphere is relaxed, the accommodation plentiful and the activities endless. To the west of Side are the holiday centres of Kumköy, Çolaklı and Kamelya, offering sun and sea in close proximity to the ancient sites. At Seleucia of Pamphylia (Bucakşıhlar), 15 km northeast of Side, are the remains of Roman baths, temples, churches, a mausoleum, theatre and agora which are in good condition. One of the most interesting and well-known caves in Turkey is located in Altınbeşik Cave National Park situated 12 km southeast of Aydınkent (İbradı) and 55 km north of Manavgat. Lakes and interesting rock formations within the cave area, as well as travertines and streams, make this area especially fascinating. Altınbeşik Cave is situated on the western slopes of the Manavgat River Valley and can be reached via Ürünlü, an authentic village and a must-see when travelling through this area. The Alarahan Caravanserai was built by the Seljuk Sultan Alaeddin Keykubat in 1230 on the banks of the Alara River. At the top of a nearby hill the Alara Fortress commands a view of the whole area. 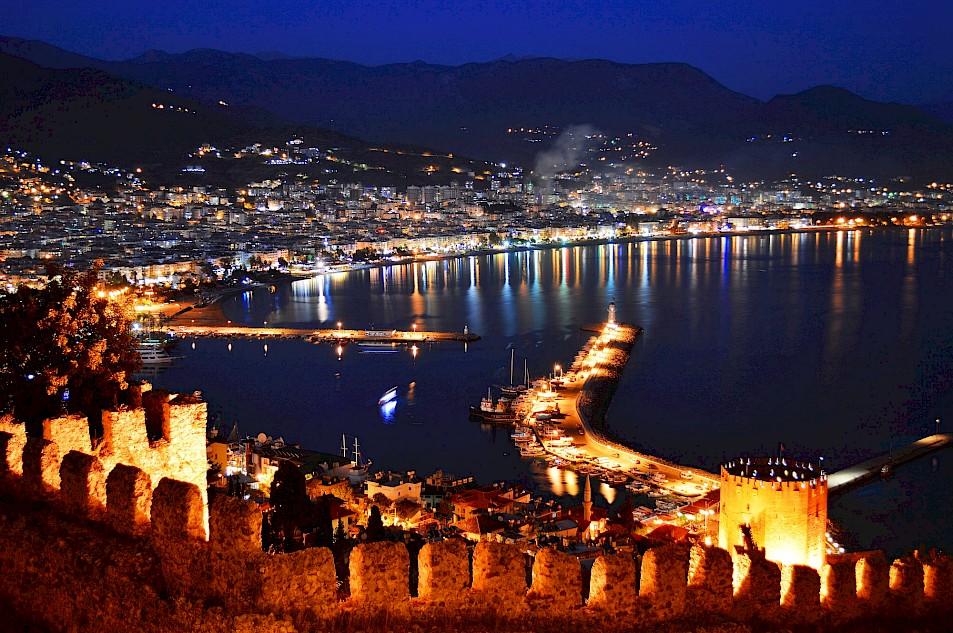 The large and popular resort centre of Alanya lies at one end of a rocky promontory which juts out into the Mediterranean between two long sandy beaches. A fortress, repaired by the Seljuks in 1231 and one of the most magnificent sights on the coast, crowns the headland. Nearly 150 towers punctuate the walls of the well-preserved, double-walled citadel. Within the outer walls are ruins of mosques, a caravanserai and a covered bazaar and within the inner walls can be found a ruined cistern and a Byzantine church. Although Alanya's history dates back to Roman times, it rose to prominence under the Seljuks when in 1220 Alaeddin Keykubat made it his winter residence and naval base. The surviving buildings reflect the importance of the city in Seljuk times. Besides the impressive citadel, tourists should explore the unique dockyards and the octagonal Kızıl Kule (Red Tower).

►“After a day of sightseeing, indulge yourself in a world of tasty wonders”