Pergamon was inscribed in the UNESCO World Heritage List in 2014, and it has been one the rare settlements that has survived several invasions and devastations over the ages, but reoccupied again on the merits of its strategic location. As confirmed by the findings of the excavations held, prehistory of Pergamon reaches back to second millennia BC. The city survived Persian domination and conquest of Alexander the Great. The most brilliant phase of its history lasted almost one hundred and fifty years when it was the capital of the Kingdom of Pergamon during 3rd and 2nd centuries BC. At this time, one of the largest libraries of the world was built here and the city became a healing centre. The arts also flourished, and the city particularly became renowned for magnificent sculptures. During the Roman period, Pergamon maintained its significance and developed further becoming "the most famous and magnificent city of the Asia Minor", as described by the 1st century AD philosopher and author Pliny the Elder. Visiting Bergama would provide you a chance to trace the steps of the ancient city Pergamon through several unique experiences.

The City of Firsts

Every year almost a million people visit Bergama and the ruins of ancient city Pergamon, which has witnessed many firsts in its history. One of the most significant of these was the first ever use of parchment. Invention of script has been a major breakthrough for the history of humanity, and innovation of parchment was quite important as it created a medium, enabling quick and stable recording of scripts. The development of parchment allowed Pergamon to create a library of manuscripts that rivalled the world renowned library of Alexandria, and paved the way to develop the city as an important centre of arts and science in the 2nd century BC. Pergamon had one of the first Seven Churches of early Christianity, and its name is cited in the Bible. The first theatre with a wooden stage; first trade union; first market law; first public building regulation; first strike and collective agreement were amongst other firsts that took place in the history of Pergamon.

The principal ruins of the ancient Pergamon, comprising all the religious, social and commercial structures, are in the acropolis and the most remarkable of these include the ruins of Pergamon Library, which was one of the largest of the world in that era and hosted a collection of 200 thousand manuscripts; the ten thousand seat theatre where the audience enjoyed the magnificent vista of Pergamon Valley; the Sanctuary of Athena and the Temple of Dionysus; the Sanctuary of Trajan; the Pergamon Gymnasium, which was one the most important learning institutions of the Hellenistic Era; and, the Royal Palaces of Pergamon. The Base of Great Altar of Pergamon, or the Zeus Altar, could also be seen in the Acropolis. However the whole superstructure of the Altar was dismantled and transported to Germany in the late Ottoman Era and it is now on display in Berlin – the Altar and its friezes show the best examples of the art and architecture of Pergamon in the Hellenistic Era. The Sanctuary of Asclepius which was one of the principal healing centres of the Antiquity, where the patients were treated with sound of water, mud baths and waters of a healing spring. Pergamon was also the home of physician Galen, father of pharmacology, making the city stand out in the history of medicine and pharmacology. The Serapis Temple dedicated to Egyptian gods was one of the principal structures of the Roman era and it was renowned as the Red Basilica due to the colour of bricks used. During the Byzantine era this noticeably huge structure was converted to a church, which is one of the first Seven Churches cited in the Bible. 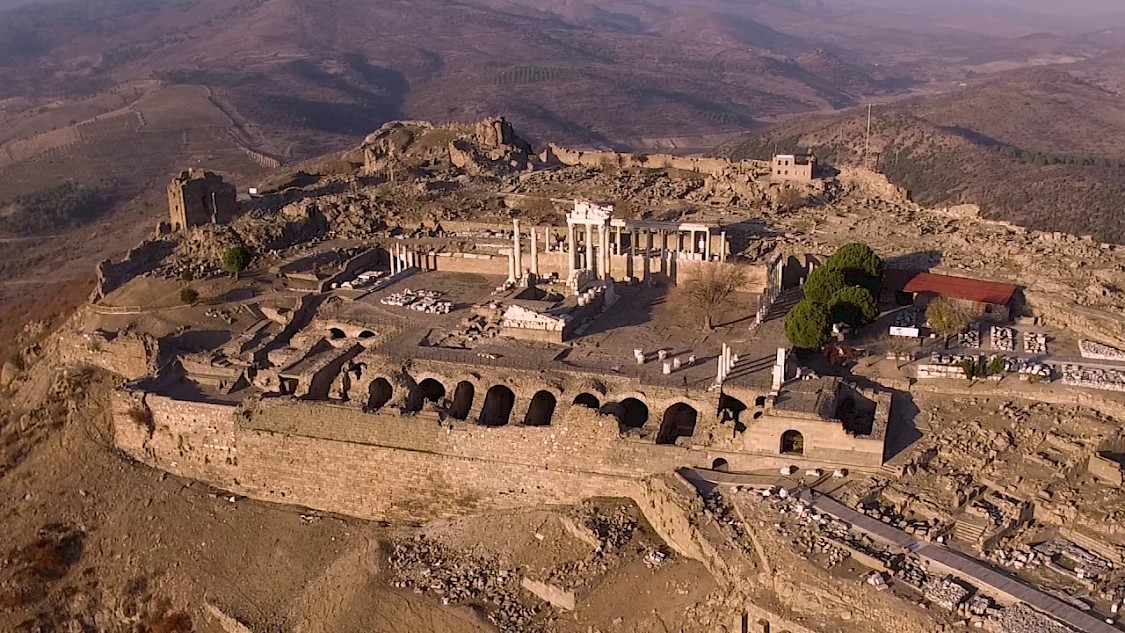 Following the Roman and Byzantine eras, Pergamon came under Turkish domination. Today’s Bergama contains examples of the Seljuk and Ottoman architecture, such as mosques, bathhouses and bridges. Most prominent of these include the Ulu Cami (the Grand Mosque), Selçuklu Minaresi (the Seljuk Minaret), Şadırvan Cami (the Ablution Fountain Mosque), Çukur Han (the Sunk Caravanserai), and Taş Han (the Stone Caravanserai). There are also examples of 18th and 19th century civil architecture at the Kale Mahallesi (Citadel Neighbourhood) which is situated at the lower slopes of the hill where the Pergamon city was once built.

Museum of Bergama: Gateway to Arts of Antiquity

The art of sculpture reached its peak in the 2nd century BC in Pergamon and statues created in that era are admired even today. The Pergamon style became one of the principle schools of sculpture, magnificent examples of which could be seen in the Museum of Bergama. The most striking works are the statues of gods, goddesses and emperors, which were unearthed in the excavations carried out in the environs of Pergamon. Although the most prominent displays of the Museum are the sculptures, there are also other artefacts from various eras on permanent display. The ethnographical department would be very interesting for those who have a keen eye for the popular culture too.

Historical Spas of Kings and Queens

The thermal springs of Pergamon made the city one of the principal centres of healing and beauty in the antiquity, and many of them reached our times. One of the major thermal spas of Pergamon is within the Sanctuary of Asclepius (Güzellik Ilıcası) which is 4 km to Bergama. It is believed to be commissioned by King Euamens of Pergamon, and provided beautifying services to Cleopatra who enjoyed bathing there.

Alongside its historic and cultural heritage, Bergama also harbours an outstanding natural beauty. Trekking along the route to Kozak Plateau through the pine forests covering the Kozak mountain range between Bergama and Ayvalık, dotted with ruins and rural landscapes, also provide opportunities for photo safaris.

Bergama is about hundred kilometres to Izmir, the largest city of Turkey at the coast of Aegean Sea. The Adnan Menderes International Airport has scheduled and charter connections to all major European airports. Also, a number of cities across Turkey are connected to Izmir by air, rail and road.